In conversation with
​Tom Atkins 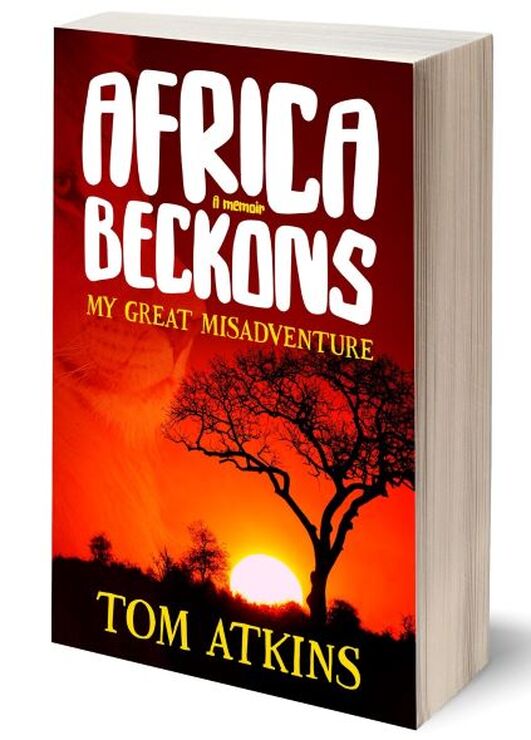 It is with great pleasure that I welcome Tom Atkins onto the website today. Tom has spent his entire working career in the newspaper industry, eventually rising to become an Executive Manager at News International Newspapers. His book Africa Beckons - My Great Misadventure is the colourful account of his intrepid jaunt to Africa in 1970 in search of a better life.

Alex: Tom, perhaps you can tell us a bit about yourself.

Tom: My author name of Tom Atkins is my real name. I was named after the Tommy Atkins - the First World War nickname for British soldiers. Due mainly to our surname - Atkins. My father's name was Bertie, he was a soldier - a Quartermaster Sergeant. Everybody called him Tom and called me Young Bert. I am not sure why. I am now 75 years old.
My entire family was employed in the printing industry. I was the 4th generation of my family to work in printing. I knew more about printing as a child because it was the main subject of conversation when members of the family got together. They were all strong union men and women. I never wanted to be in printing - I wanted to be a jet pilot or train driver.
My childhood was not a normal one. My parents moved to a new house many times; why, I do not know except for one time. We lived for a period in Sudbury, Suffolk. One day as a family we went out for a walk in the countryside. When we returned the house had burnt down. Our home journey ended up at various addresses in South-East London.
Because we moved so often, I was an introverted child. It took time to make friends when moving so often. From an early age I loved reading and exploring, I was curious about anything that intrigued me. Often alone, these pursuits became a large part of my life and ones I would bury myself in at the exclusion of everything else. The exploration side made me incident and accident prone. A personal proclivity that has continued throughout my life.
At the age of two, I gripped the heating coil of an electric fire that had been switched on. The electric current travelled up my baby left arm, which became attached to the metal fire and continued its circuit through a hole it burnt in my arm. This kept the fire operational and the coil continued to get hotter- it burnt off the inside of my left hand.
This is where another characteristic of my life comes into play. An alternation of incidence and good luck.
I was sent to East Grinstead Hospital where I was under the medical care of Archibald McIndoe, later made a Sir. McIndoe was a pioneering plastic surgeon famous for rebuilding the burnt airman in World War II. The airmen were called McIndoe’s Guinea Pig Club. He rebuilt my hand from the skin of my thighs and bum. It took over 10 years of operations to get my hand back to working order. Very scarred, slightly shorter and curled.
From that day on I have always considered myself a self-pronounced member of McIndoe’s Guinea Piglet Club. I will not bore you with the many other incidents of my childhood - although there were many.
My habits as a child carried me through my life. Particularly reading.
I entered the printing industry as an apprentice in North London. It later closed and another, bigger company took up my apprenticeship. It was a combined commercial magazine and national newspaper printer. After a few years that company discontinued commercial printing and transferred me to yet another commercial printer they owned. In three years, my apprenticeship was over three different companies. It seemed like bad luck. But the experience and knowledge I had gained kicked in. In an extraordinary stroke of good fortune, the company they had transferred me to had insufficiently qualified people to operate their plant. Except me.
So, my apprenticeship was suspended, and I was promoted to the senior operational level to operate the plant and teach the other employees. It made me, probably the highest paid ‘apprentice’ in the industry/country and helped me buy my first house at the age of twenty-one. I moved in with my family the day that England won the football World Cup. It did not last. A deep recession hit the industry and I found myself unemployed and struggling to keep my home and family. Those circumstances caused me to leave my family behind and search for a better life in Africa. And my travelling tale was born.
At the same time, I was developing a career in the Trade Union. I had already represented many employees and my efforts led me to be elected as a London representative on SOGAT’s (Society of Graphical and Allied Trades) Executive Council - a likely shoe-in to a fulltime national office. However, I did not like the politics of a Trade Union career and turned my back on it.
I entered the newspaper industry in 1976 as a clerk. Later I became an Assistant Publisher of the Sunday People. I have worked on most national newspapers at one time or another. My final position in the industry was as Executive Manager at News International Newspapers Ltd. Printers of The Times, Sunday Times, The News of the World and the Sun plus the Times Educational Supplements. I retired in 2005. 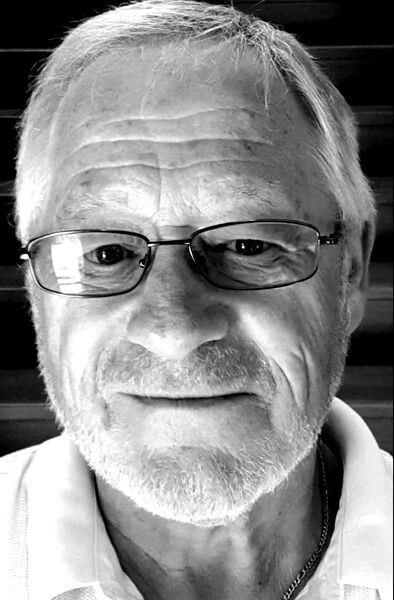 Alex: Tell us about your book.

Tom: AFRICA BECKONS, My Great Misadventure Is the story of my journey to Africa in November 1970. To give you the run down of my journey and later book. It is best to provide the back cover information:
​In 1970, Tom Atkins, at the age of 25, is unemployed and struggling to keep his young family and home in England. He sells his small car and uses the proceeds to buy a flight to Africa and with little preparation, sets off in search for a better life. Tom has only five pounds in his pocket and is obliged to borrow £30 from his father as they drive to the airport.
Then, in an incredible sequence of events, the situations he encounters become more life-threatening than life changing as Tom stumbles from one perilous situation to another, often at the point of a gun. Lucky to survive horrendous plane journeys, the threat of imprisonment and the everyday challenges of a wild and dangerous continent, Tom lives to tell his tale.
These thrilling and often hilarious travel stories reflect a precarious time in both Tom's and Africa's history, and offer a fascinating personal insight into Idi Amin's Uganda and the pernicious Apartheid of South Africa, as they emerge from a colonial past to carve out a new future.
AFRICA BECKONS, My Great Misadventure is the first book I have published. But not the first book I have started. I will eventually finish my first project, which is a work of fiction. I have written short stories - some published, some not. But most of the writing I have done is work/industry - related including reports and suchlike.
The Sequel to Africa Beckons, which I hope to publish later this year is not a continuation of the 1970 trip and experience, but a collection of stories from around the world where my proclivity of finding myself in dangerous situations and having the good luck to survive them, reflects my travelling and working life in general. I also hope to finish the first book I started, which will be a work of fiction, in 2021.
AFRICA BECKONS, My Great Misadventure is a memoir from over 50 years ago. It came about by accident when someone at a dinner party asked me if I had ever been to Africa. I related a little of what happened to me in 1970. After that party I was asked to tell more, and friends started to urge me to write a book about it. In the beginning I was not sure I could write a book but, as I recalled the stories, the memories just came flooding back to me as if it happened yesterday. I was over 70 years of age when I started writing it.
I received this endorsement from Janet Dean Knight, author of The Peacemaker:
'Tom Atkins is a natural storyteller. These tales of his adventures in Africa are recollected with rich detail and woven with his unique brand of self-deprecating humour. Tom's near unbelievable ability to get into dangerous scrapes and survive will amaze his readers, but it is his skill in re-telling each anecdote in such a genuinely funny way that makes this book the success it deserves to be.'

Alex: What other countries have you been to?

Alex: How would you describe your style of writing?

Tom: My style of writing? I wouldn't like to say. It's early days for me. But perhaps a review by one of my readers can answer your question.  What they said actually means a lot to me. She said she'd really enjoyed it and felt it was like receiving a long letter from an old friend telling her what I had been up to.

Alex: Do you plan your writing or does it just evolve as you write?

Tom: I consider myself a detail conscious person in all the work I do. As my first two books will be memoirs it is difficult to get a handle on... Having a life in which so much has happened tends to give me a starting point of a story. But yes, once I have that point, I try to build a working synopsis and add the detail.

Alex: can you remember the first book you ever read?

Tom: No, I can't remember the first book I ever read, but it must have been good because I have been an avid reader ever since.

Alex: Do you do much research when writing?

Tom: Even when it comes to memoirs, I do try to check my facts, as long-term memories can sometimes let you down.
​
Alex: What was the last book that blew you away?

Tom: The last book that blew me away was 1OOO Years of Annoying the French ​by Stephen Clark.
For anybody living in France it is essential reading. We live in South-West France.

Alex: How do you market your book?

Tom: Not very well, and am currently looking for marketing help.

Tom: We renovated a 300+ year old, derelict, Water Mill in France. It is our interest and our business, pandemics allowing.

Alex: Which authors do you particularly admire?

Tom: Too many to list. But among our favourites are Wilbur Smith, Steven King, David Baldacci, Patricia Cornwall, Bernard Cornwell, Robert Harris and Michael Connelly.

Alex: Well, thank you so much for sharing all this with us, Tom. It's been fascinating to hear about your experiences both abroad and in the world of newspapers. I wish you all the best with the sequel.

Tom: Thank you Alex. It's been a pleasure.