In conversation with
​Sue Clark

It' a great pleasure to welcome Sue Clark onto the website. As  a writer of comedy for the BBC, Sue has written lines for some very familiar faces including the likes of Mel Smith and Griff Rhys Jones. Now she has written her first comic novel Note to Boy. ​And I, for one, can't wait to read it.

​Alex: Sue, tell us a bit about yourself.

Sue: I’m a Brummie, though I haven’t lived in the Midlands since I was thirteen and long ago lost the accent, our kid! I now live in suburban Oxfordshire in a little market town.
I’m what is politely known as a ‘natural writer’. In other words, I don’t have a degree in medieval literature and didn’t go to Cambridge with Emma Thompson. In fact, the closest I’ve ever come to an actual writing qualification, beyond school, is a part-time creative writing course in Oxford. I can neither confirm nor deny that sometimes I claim to be ‘Oxford educated’.
Undaunted, I’ve been a professional writer of one kind  or another for most of my adult life. Let me think, I’ve been: a journalist, PR writer, copywriter, editor, guidebook writer and, for one glorious summer, a reader of novels for a film producer looking for the next big blockbuster. I didn’t find any.
None of this was what I really wanted to do. What I wanted to do was write comedy.
So alongside these various day jobs, for many years I wrote radio and TV comedy scripts for the BBC. I contributed to topical radio shows like Week Ending and The News Huddlines, and wrote for TV sketch shows like Three of a Kind and Alas Smith and Jones, putting words into the mouths of comedy greats from David Jason and June Whitfield to Lenny Henry and Tracey Ullman.
The novel came later when I was at last able to give up the old nine-to-five. My debut, the comic fiction Note to Boy, was published by Unbound in July 2020. 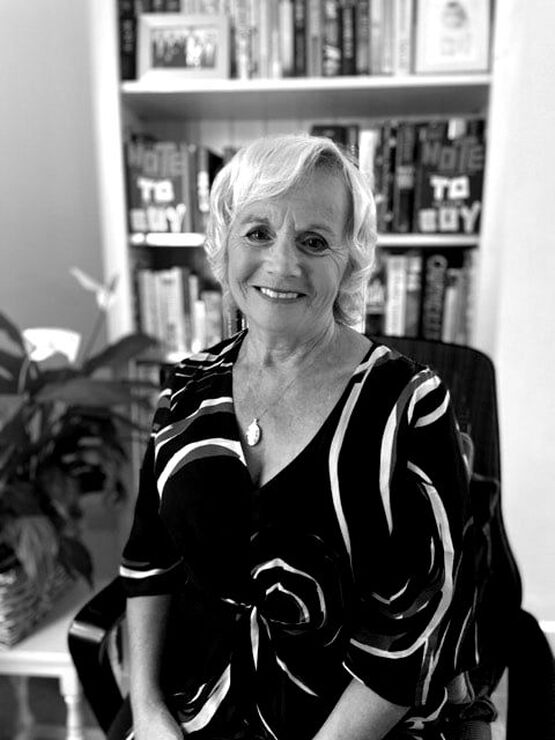 ​Sue: Sorry if you’re looking for profound literary insights here but I write to entertain – me and the reader. Having said that, as everyone knows, you can tackle serious topics in the guise of humour. I’m a firm believer that almost every book can be improved by an injection of a laugh or two.
I’d describe Note to Boy as light-hearted, contemporary fiction. Though it’s unashamedly uplifting, it explores some big themes: fame and what to do when you’ve lost it; the power of unlikely friendships; retribution and redemption; and the way the very young and the very old can become invisible to society. And it’s not without its poignant moments. A reader said it made her ‘laugh a lot and cry a little.’ Job done!

​Alex: Are you a writer that plans a detailed synopsis or do you set out with a vague idea and let the story unfold as you write? ​

​Sue: Planner or pantster? Disorganised would be a more accurate description, especially if you could see the state of my desk. I start writing with good intentions, drawing elaborate timelines, writing detailed chapter summaries, and plastering the door of my workroom with post-it notes.
Inevitably these get abandoned as the story takes hold and I wing it. I do, however keep a notebook bulging with cuttings. Any inconsistencies and plot holes, I try to put right in the editing process.

Sue: Note to Boy tells the tale of two very different characters: Eloise is an erratic, faded fashionista, fallen on hard times, and Bradley is a glum but wily teenager, overlooked and underestimated. She wants her celebrity life back. He just wants a life. And perhaps a warm coat.
Fate brings this odd couple together when Eloise needs help to write her racy memoirs. Their worlds collide, and the fun starts.

Sue: Flower Fairies by Cicely Mary Barker, first published in 1923. I know! Rather fey reading, especially for a girl like me. Not much in the way of humour or even a story, as I recall, though the illustrations were lovely. It was obviously chosen by someone who didn’t know me very well.
When I was old enough to choose my own reading, I went for more meaty fare: She by Rider Haggard, Swiss Family Robinson by Johann David Wyss and, my favourite, the Sherlock Holmes stories by Arthur Conan Doyle. I was never an Enid Blyton or Chalet School kind of kid.
​
Alex: How much research do you do and what does it usually entail?

Sue: Write first and research later is how I tend to work. I’ve no idea if this is the right way to do it but it works for me.
Note to Boy has flashbacks to the Swinging London of the 1960s. As I lived in London, sharing a flat near Oxford Circus around this time – This is where you say, ‘Oh, but you look so young!’ – it was more reminiscing than researching. I worked for an American film company, bought my miniskirts in Carnaby Street, and went to the sort of parties where you might bump into a James Bond actor. Plenty of material in that!
The setting for the book is a specific part of central London, so I spent days tramping the streets of Bayswater and Soho, seeking out likely locations for various scenes.
I also ventured south of the river to go to an exclusive vintage clothing auction, in the name of authenticity. I must say, it was an amazing experience. Both the clothes and the people who bought them were bizarre and the prices paid for the ‘pieces’ – one of them an evening gown worn by Princess Diana – were eye-watering.

Sue: Much of my source material for Note to Boy is … myself. I’m the person I know best, after all.
Some of Bradley is the younger me, full of over-ambition and self-doubt in equal measure and, though I’m not a gin-soaked, over-the-hill fashion designer, I fear I am slowly turning into eccentric, irritable, unpredictable Eloise.
Added to that, I’ve worked in radio, television and on newspapers, and I’ve written scripts for comedians. I’ve seen celebrity from the side-lines. Mentioning no names, some of the characters in Note to Boy may bear a passing resemblance to stars I have encountered.

Sue: Can I pick two?

Alex: Of course.
​
Sue: Of the big hitters, I loved Maggie O’Farrell’s Hamnet. So well imagined and real, and so heart-breaking. For a wonderful mix of belly laughs, poignancy and dentistry, I’d recommend Nina Stibbe’s Reasons to be Cheerful.
Can I also put in a word here for the not-yet-mainstream books of my publisher Unbound (Unbound.com)? Unbound is doing a great job of bringing to the fore books, like mine, that do not conveniently fit into a conventional publishing mould. I love to read undiscovered gems and there are many on Unbound’s list from sci-fi and fantasy, biographies and thrillers, to rom coms and graphic novels. And of course, loads of humour. Check them out.

Sue: With difficulty, is the short answer, especially during a global pandemic. The truth is I love writing and editing; I hate ‘selling’. With no live events taking place, I’ve done my best to get to grips with online media.
I gave myself a crash course in Twitter (@SueClarkAuthor) and set up a website (sueclarkauthor.com) and a Facebook page (sueclarkauthor). And if you want someone to mute you on Zoom just as you reach the punch-line of your joke, or freeze you when you have an important question to ask, I’m your woman!
I’ll video chat with anyone who’ll listen. So far I’ve had a virtual launch in conjunction with my local, lovely bookshop (Mostly Books of Abingdon), chatted to a few podcasters, book clubs and libraries, and recently took part in a comedy workshop via the ubiquitous Zoom.
In ‘old school’ marketing terms, I’ve been featured in the local press, though they managed to marry me off to the wrong man. Fortunately, my actual husband has a sense of humour. As a supporter of independent bookshops (use them or lose them, folks!) I’ve been in contact with many of them and am happy to report that, to date, Note to Boy is available in ‘indies’ from Edinburgh to Belfast, Bridport to Brick Lane.

Sue: All the things we can’t do at the moment! Going to the cinema and the theatre, visiting art galleries, taking long walks in the Oxfordshire countryside, and going on wildlife holidays to far-flung places.
All are possible virtually, of course but it’s not the same. Watching blue-tits take on the squirrels at the bird table doesn’t quite live up to the thrill of watching a family of pigmy elephants swim across a river, a pride of lions devour a zebra, or having a wild mountain gorilla reach out to touch my leg in greeting.
And I do yoga. Not very well, as you can probably tell from my lack of yogic serenity.

Sue: I read a lot of comedy, which I’m delighted to say seems to be enjoying a resurgence at the moment. Thanks, Covid!
There are the masters of course: PG Wodehouse and Tom Sharpe. Of contemporary humourists I admire (as I’ve mentioned before) Nina Stibbe because – if I may be so bold – we inhabit the same territory: first person stories about extraordinary, ordinary people, that are both funny and sad.
David Nicholls’ books hit that sweet spot between humour and pathos too. He captures so well and so wittily the insane knots we tie ourselves up in when it comes to relationships and emotions. I particularly loved Sweet Sorrow.
Kate Atkinson has shown herself to be extremely versatile. Life after Life I thought was astonishingly good. Her books have a lightness of touch that belies her skill. And she writes great animals. She’s the novelist I’m most jealous of.
If I’m feeling historical, I turn to Robert Harris or C. J. Sansom. You know you’re in safe hands with them.

Alex: Many thanks Sue for this entertaining and insightful chat. I'm looking forward to reading Note to Boy.
​Readers can read more about Sue and her debut novel by visiting the sites below.
​Twitter - @ SueClarkAuthor
Note to Boy available from:
My website - https://sueclarkauthor.com/product/note-to-boy/
Bookshop.org - https://uk.bookshop.org/books/note-to-boy/9781789650938
Amazon - https://www.amazon.co.uk/Note-Boy-Sue-Clark/dp/1789650933
Blackwells - https://blackwells.co.uk/bookshop/product/Note-to-Boy-by-Sue-Clark-author/9781789650938
And all good indie bookshops