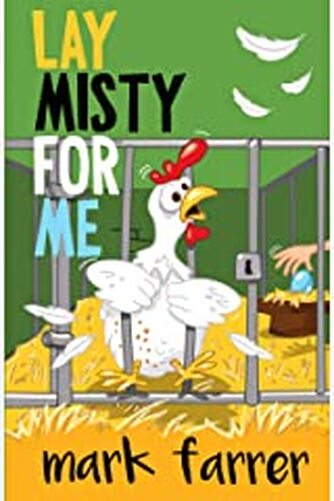 It gives me great pleasure to welcome Mark Farrer onto the website today. Mark is the author of eight comic novels in his Cullen & Big Paul ​series.

Alex: Mark, tell us a bit about yourself.

Mark: I’m an adopted Scot, originally from Liverpool. I lived and worked in London and the South-East for 20 years before moving up to Edinburgh in 2001. I retired from IT in 2015 and started writing full-time. I have three grown-up children, two currently at University and one who graduated from Dundee last year with a First!
My latest novel, Lay Misty For Me is the eighth book in my CULLEN & BIG PAUL series, although all of the books are standalone stories and can be read in any order.

Alex:  How would you describe your writing, and are there particular themes that you like to explore?

Mark: My books are comedies which revolve around a bad guy who gets his comeuppance in a fitting way, courtesy of Cullen & Big Paul. They have been compared to writers like Caimh McDonnell, Chris Brookmyre, Tom Sharpe and Carl Hiaasen. In each book there is a different immoral baddie who is committing some crime which offends Cullen’s very individual sense of right and wrong.
All of my books are set in Scotland with strong Scottish themes and backdrops. So far, I have touched on salmon farming, Scottish football, the Church of Scotland, textile mills, the Scottish Courts System and the Melrose Rugby Sevens tournament. I have a spreadsheet (I’m big on spreadsheets!) full of many more: whisky, North Sea Oil, Hogmanay, the Forth Bridges, sheep-farming, bio-sciences, wave & wind energy, Edinburgh Festival, ship-building, etc. ​
Alex: Are you a writer that plans a detailed synopsis or do you set out with a vague idea and let the story unfold as you write?

Mark: I’m very much a plotter, not a pantster. I start with the title - all my titles are puns on Clint Eastwood films, so the pun gives me a connection to a theme or setting. I have an over-arching storyline for Cullen & Big Paul I need to weave in, plus I need a nasty villain who gets his comeuppance for a particular crime in some becoming fashion and then colourful local characters who each have their own motivations. It’s a bit like constructing a jigsaw puzzle – taking all these pieces and trying to make them align within a plot that has a beginning, middle and end! This usually takes about 4 weeks for a novel.
​I produce a flowchart for the story where each box on the chart is a scene in the book. When I have around 100 scenes I feel I have a novel-length story. Then I work on the first draft: I write 10,000 words a week and usually write long which means my first draft will be 120,000+ words, so this takes 3-4 months.
I then do the rewrite which is the hardest part. This involves cutting away a lot of the dead wood and trying to make the story make sense (as I have usually discovered during the first draft that my flowchart had errors or omissions which “break” the story). I delete characters and scenes, write new ones and tweak a lot to make things consistent. This takes about 6 weeks, but often longer as I get overwhelmed at how much needs to be done so usually put this stage off for weeks and weeks!
​By then I have my “alpha” copy which I am prepared to let my partner read and critique. Based on her feedback I may make some structural changes and, while she is reading it, I will go through it again myself, reading it aloud, to find typos, inconsistencies, repetition and that sort of thing. Once I have made all of these changes – say, another 3-4 weeks – I send it to my Beta readers and ask for their comments. I allow a further 3-4 weeks for their feedback and any changes I then make. While all this is going on, I get my cover design done and then the book is ready to be published!

Mark: Lay Misty For Me is a comedy about an unscrupulous egg farmer who gets his comeuppance for stopping at nothing to secure a lucrative supermarket contract, including flouting animal welfare rules and evicting tenant farmers to make space for more chicken sheds. It was released in December 2020.
I am now plotting my next two books – a novella, Trouble With The Perv, due out in Spring 2021, and another novel, Two Fuels For Sister Sarah, towards the end of 2021.
All my books are published by my own imprint, Funny Business Press, and available only on Amazon. The novels are £3.99 (Kindle) and £10.99 (paperback); the novellas are £1.99 (Kindle) and £4.99 (Paperback).

​Alex: What was the first book you read?

Mark: I don’t remember that far back! I guess it was a Janet & John book at school. I do know I was a voracious reader as a child and used to go with my Dad to the library every week and take out 4 or 5 books at a time.
​
Alex: How much research do you do and what does it usually entail?

Mark: I tend to do a lot of research for my books. For my first book, Where Seagulls Dare, I didn’t need to do much at all as I had worked in the salmon farming industry, visited many sites and understood a lot about the business before I started. This wasn’t the case for my other books, as I later realised. I am constantly impressed and delighted by the willingness of the people I approach asking for information about their job, business or specialist expertise, especially since they don’t know me and will gain no benefit from me using their knowledge or situation in a book. I also tend to ask off-kilter questions – as per the plots of my books – which get me funny looks a lot. For example, asking the Melrose Rugby Club president if his trophy cabinet was alarmed and what would happen if someone broke in to steal a trophy, or asking the tour guide at a Nuclear Power Station if it would be possible for someone to smuggle out some enriched uranium, or asking the owner of a textile mill if interering with any of the machinery could cause severe injuries!
For A Fistful Of Collars, I visited textile mills in Elgin and Hawick, googled madly about London Fashion Week and the Church of Scotland. I also went to watch a Hibs game at Easter Road so that I could establish which tenement window a hitman would have to use in order to shoot someone in the stands. I wasn’t interested in the match at all!